Our picks for the Best Swimming Hole in each state! 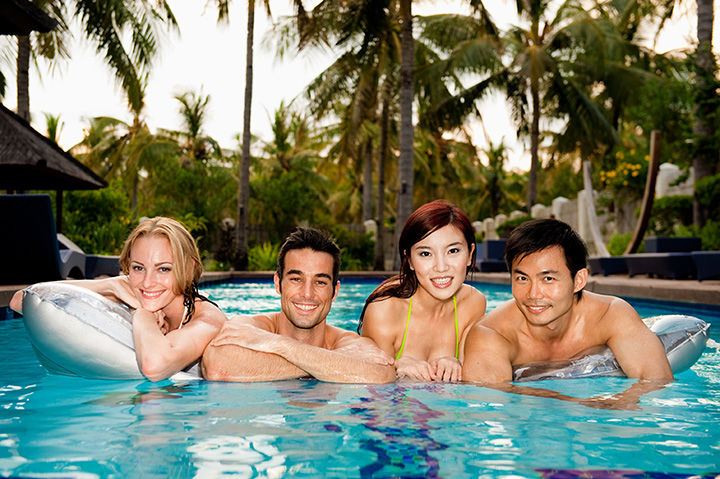 Sometimes what you need, is to do a massive "cannonball" into a pool of cool, clear water. Or throw yourself headfirst into a crashing wave. Or maybe, just float around in a lake, letting the cares of the world wash away. A public swimming pool is nice, but there's something about a natural body of water that has it beat: you get pretty scenery and don't smell like chlorine at the end of the afternoon.

No matter what state you're in, there are awesome places to get your swim on. They range from man-made reservoirs, swimming holes carved by Mother Nature, majestic beaches or massive lakes in places you might not expect. So grab your swimsuit and towel, and prepare to get drenched!

This swimming hole rates among the best in the world. Martha's Falls within the canyon is a popular spot, but there's a bit of a hike in from the parking area. Luckily, cool, refreshing waters await you.

This popular lake is located within a park. Locals appreciate how clean it is, and the fact that lifeguards are at the ready.

Take your turn on the 80-foot sliding rock or leap off a boulder into a deeper pool. This swimming hole has a variety of water features who want to cool off from the hot desert sun.

This 40-mile long lake attracts swimmers for its exceptionally clear waters. Scuba divers appreciate it, too. It's considered one of the cleanest lakes in America, and is surrounded by pretty spectacular forests.

The Travel Channel regularly includes this on their list of "top 10 beaches." It's a favorite among surfers, but the warm water and beautiful sand attracts those who just want to paddle around.

Situated in the town of the same name, it's the state's largest natural lake. The surrounding views of the Rockies, including the extinct volcano, Mt. Baldy, make it a one of a kind swimming adventure (even if the water is pretty cold).

Enjoy the waters of Long Island Sound on this lovely beach. The shoreline is beautiful, and during the off-season, nature lovers can spot a seal or two. The boardwalk is also a favorite of locals.

For such a small state, it has 25 miles of popular beaches. This is perhaps its finest, offering both the ocean and quieter bays nearby. Lifeguards patrol its 6 miles of beachfront, and families appreciate the quieter atmosphere versus other Delaware beach towns.

Folks living in our nation's capital head east to this park, on the shores of the Chesapeake Bay. You can swim on a lifeguarded beach, as you take in views of the beautiful Chesapeake Bay Bridge.

OK, so there are a ton of great beaches to choose from in the Sunshine State, but this one regularly takes top honors. The water is warm all year round, the lifeguards are always on duty and the sand is super-fine.

The cool, clear water of the waterfalls fills one of the more popular swimming holes in this northern part of the state. There are rocks to lounge on and calmer pools to simply float in when you want to forget the southern heat.

Another state with amazing beaches, but among them, Lanikai Beach has been named one of the top in the world (by National Geographic, no less). The waters are beautifully calm - but note that there are no lifeguards.

It's one of the most-photographed spots in the state. The water and beach is pristine, and the Elephant's Perch (a 10,000 foot mountain on one end of the lake) makes an interesting backdrop.

The skyline of the windy city is set off to perfection on this lovely beach bordering Lake Michigan. The water is clear (and cold), but the sand is perfect for building sand castles, a volleyball game or just relaxing on.

Lake Monroe is a reservoir and comprises the largest manmade lake in the state. Fairfax Beach is a popular spot for swimming and picnicking, and the surrounding scenery just adds to a nice day out.

Located in Des Moines County, Big Hollow is a popular spot for outdoor recreation including camping, fishing, kayaking, and swimming. Take a dip in the 178-acre lake to cool off on a hot summer day. The lake also boasts a boat ramp and several designated fishing areas.

The 100-acre spring-fed lake is tucked away in a canyon and surrounded by some pretty magnificent nature, including craggy bluffs. National Geographic calls it one of the "must-see" parks in the country.

Located in south-central Kentucky, this popular lake offers sandy shores and a glorious 10,000 acres of water to splash in. Rolling hills surround it, making it one of the most relaxing destinations in the Bluegrass State.

It's quiet, with none of the Mardi Gras craziness you might associate with Louisiana. Lots of seashells to collect when you're not splashing in the waters of the Gulf of Mexico - but don't expect a boardwalk, rides or other "beach-y" things. Just a peaceful outing.

Just outside of Portland is this family-favorite beach. The waters are gentle, and it's a good length for strolling or kite-flying.

This beach town on the Eastern Shore has been a destination for decades. With 10 miles of sandy beach, there's always a place to plant your umbrella. The 2.5 mile boardwalk is a fun way to end the day.

It's part of the beautiful Cape Cod National Seashore, and offers lovely views of the Atlantic Ocean. Of the many beaches in the state, families like the fact that the waves aren't too intense and the seaweed is at a minimum.

There are a ton of beaches bordering the Great Lakes, but this is one of only three that are "certified clean" as it relates to public health. This beach runs along almost 3 miles of Lake Michigan; besides the clear waters, the sand is like white sugar.

In a state known for its "10,000 lakes," there's no lack of swimming options. However, this one attracts folks from nearby Fargo, ND, Canada and beyond. Part of the appeal is the sheer beauty, that blends both forest and prairie around the lake; another reason is that it's one of the few state park swim beaches with lifeguards.

The state doesn't lack for beaches, but this one regularly draws the top slot. The water is warm and clear, the sands white and dolphin-spotting is a fun extra.

It's called that for the large rock enclosures that "shut in" several different pools. There are a variety of natural formations, including a water slide - and you can choose which pool to sample from the observation deck.

The beautifully-clear waters are only rivaled by the mountains surrounding them. The fact that you're swimming at 3,012 feet is also kinda breathtaking.

Nebraska doesn't seem much like "lake" country, so you might be surprised at "Lake Mac"s size: twenty miles long and four miles wide (it's actually a reservoir). The beaches surrounding it are so white, you might mistake them for the Carribbean.

Lake Tahoe has plenty of places to swim, but this beach is the go-to for several reasons. Kids can walk out pretty far into the cool water, and there are also boulders for jumping into deeper parts. Older kids can also explore some neat coves.

It's more a series of waterfalls, but they lead to some lovely swimming spots. Because it's New Hampshire, you'll only want to swim in the summer months or risk becoming a human slushie.

This 18-mile barrier island has any kind of beach you'd want, from those on the ocean to those on a quieter bay. The south end offers more post-beach family activities like amusement rides; the quieter north end has an historic lighthouse to visit after washing off the sand.

It's the largest lake in the state, and the most popular. During the summer, expect to share the deliciously cool waters with plenty of parched residents.

About 33 miles outside of New York City lies this popular beach running 6.5 miles along the ocean. There are also bays of quieter water and a two-mile boardwalk.

It's Mother's Nature's version of a water slide. Located in the Pisgah National Forest, you slip and slide down a smooth 60-foot rock into the cool waters below. Lifeguards are always on hand, and its good for both kids and adults.

This popular beach is an offshoot of the reservoir that's fed by the Missouri River. At this beach, families appreciate the fact that kids can walk well out into the lake before it gets too deep.

The natural lake attracts families for its seclusion and the fact that it never gets too crowded on the 600-foot beach. The wooded area surrounding the lake makes for a nice picnic area.

At 77 feet, the falls drop into a gorgeous natural swimming pool. And like all good swimming places, there are concession stands around the park. Just remember to "wait a half hour before going back in the water."

38. OREGON Oneonta Gorge, outside of Portland

It's a little challenging reaching this secluded waterfall and swimming hole (you're hiking through a narrow canyon) - but the trek is well-worth it. The oasis is one of the most picturesque parts of the state

Even though the state is landlocked, the Joseph Foster Sayers Reservoir in the park makes for a great beach day. The 1,730-acre manmade lake is surrounded by gorgeous forests and fields.

The Ocean State doesn't lack for beaches, and this is a favorite. In the morning, surfers ride the 4-to-8 foot swells; the rest of the day is for families who enjoy the sand, sun and great little nearby restaurants.

Considered to be one of the most beautiful beaches in South Carolina, Folly Beach draws tourists from all across the nation every year. Jump in the water to wade through some of the best waves on the east coast. Grab your surf board, kayak or paddle board for some other fun water recreation.

Amazing rock formations surround this gorgeous lake - and rise up out of parts of it. After having a splash around, explore the walking trail that surrounds it and get another spectacular view.

The swimming hole is a top pick by Travel and Leisure. The 75-foot falls continually fill this natural "pool" -- and the scenery along the pathways in is breathtaking.

Cool off from the hot Texas sun in this fantastic swimming hole. Tall trees surround and shade it, and of course, the rope swings are hard to resist.

Located near Garden City, this popular spot attracts swimmers who appreciate the azure-blue waters of this mountain lake.s The lake itself has been called "the Caribbean of the Rockies."

It's so deep, clean and clear that it's been compared to a Norwegian fjord. The lake has a gentle slope so kids can walk out pretty far before it gets too deep, and the surrounding mountains are spectacular.

In this popular resort area, this beach is a favorite of the locals who work hard to keep it from becoming too "touristy." It's not too crowded and located away from the more commercial areas. The water is spectacular.

Locals consider it a hidden gem within the city. Located on Lake Washington, it's never crowded, has a fun swimming deck and lifeguards. There are also shady, green spots if you need a break from the sun.

The Middle Fork River has attracted swimmers for decades. Gorgeous woodlands surround a large pool, carved by Mother Nature's hand. There are also nice flat rocks to hang out on, taking in the view.

You'd hardly expect Wisconsin to be home to one of the best beaches in the country, but there you go. It stretches along Lake Michigan for over a mile, and the clear water (which isn't too deep) varies from light to deep blue.

It's a popular place for a dip, because natural hot springs mix with cold river water, making it comfortably warm. You'll have to wait until after the spring, though --because the river rises and becomes dangerous.